Dedicated to Cuban musician Bebo Valdes, this animated feature took the Best Film Award at the International Animation Festival in Holland.
Directed by Trueba and Javier Mariscal hand, won the Award for Best Film at the International Animation Festival Holland (HAFF) by unanimous decision of the jury.
Through this FIML viewers will be moved to "a vivid and vibrant time in the history of jazz".
"It's a classic love story that unites different continents and time points, using music to weave a web of memories and nostalgia to create a beautiful and sad story," said the jury.
"Chico & Rita" tells the love story between a pianist and a singer, for whom life is coming together and apart, like a bolero. Moreover, it is also the story of New York and Havana between 40 and 50.
The soundtrack of this co-production between Spain and the UK is run by Bebo Valdes, who was assisted by Estrella Morente and an impressive list of Cuban and American musicians. Its release is scheduled for November 19 in the UK and Ireland.
Publicado por Unknown en 7:49 PM No comments: 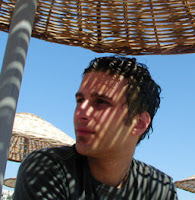 Jeff Treves is a great artist in the animation and illustration. A graduate of Savannah College of Art and Design in 2004, worked in New York for different studies for 4 years and continued his career in Istanbul since 2008.

He loves all kinds of animation and filmmaking in general. Particularly those in which the characters' stories are powerful. Discovered what he really wanted to do for work, defined as the fact that half the job. The remainder of this paper is only for research and training.Says he took about 22 years know what he wanted to do with the cartoon characters. And he reiterate that it is never late to learn what you really want to learn, saying the talent is nothing compared to the determination.


Today is the head of Treves studies in Istanbul, and here present his work. Enjoy.

Radio Galega brings together the winners of Animacam third edition 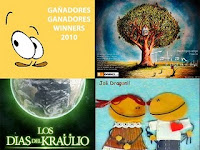 On Saturday 30 October, the program "Nos quen" of Radio Galega brought together the winners of the  Third Edition of Animacam, who, along with festival director Xosé Luis Carneiro, shared a nice "little while" on the airwaves. In the interview shared his passion for the world of animation, deep into its initial stages of development of this art.

Josué Jaramillo from Colombia, Inma Carpe from Denmark and Eduardo Alés from Almeria, we discussed the present and future projects without forgetting thanks to Animacam. Well, then, from Animacam can only answer that gratitude is ours to them and to all of you who make possible that the world grows a little more each day.

For your effort, your work, your joy, your passion ...
Thank you very much everybody!!
Here is your house
While we wait to send us the full interview in high quality ... for those who do not wish to wait, you can find the cut by clicking here. It is located in the fragment of Saturday - 9:05 - in the 37 '30 ".
Publicado por Unknown en 4:37 PM No comments: