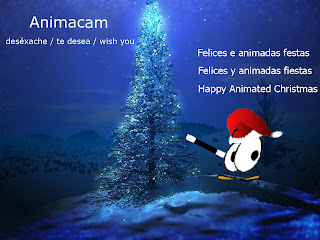 All our gratitude,
For having grown, one more year, with you,
For having shared, your animated live, with us,
For having walked together, to animate the world,
…
For all that, and much more
HAPPY ANIMATED CHRISTMAS
AND A HAPPY NEW YEAR!
Publicado por Unknown en 6:59 PM 1 comment: 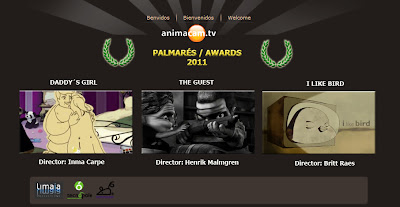 The Belgian director BRITT RAES, with her Retrospective creation "I LIKE BIRD", presents a film which includes the most interactive side of the most little-aged with the audiovisual media and the reaction that they arouse in her mind and imagination.

In contrast, the Spanish-Danish animator INMA CARPE, with her Multimedia work "DADDY'S GIRL", creates an advertising spot proposal for BARBIE I CAN BE, the Matel's doll, in which the parental relations prevail, showing her kindest side.

On the other hand, the director HENRIK MALMGREN with his film "THE GUEST", with high impact at festivals such as Siggraph (Los Angeles), takes us, through a psychological thriller, into the burning issue of the loneliness and the social exclusion within the troubled and controversial actual society.

205 films from 38 countries from the 5 continents (1 of each 3 directed by women) had coincided in the subject matters of their animation films submitted at the 4th Edition of Animacam 2011 (the only International Animation Online Festival in the World), produced and realized in Ourense (Spain), since the last 4 years.

The presence of Women animating in 2011 was magnificent: they were present practically in all the movies at conquest and as a directors, they signed 72 films from the 205 finalists. We also remark their extraordinary active participation in the Festival’s blog “Women Animating”, which English version had more tan 41.000 visits.

Until December 15th , registered users from more than 100 countries, has voted for the 3 best films between those 205 finalists, at the 3 categories at conquest: Short film, Multimedia and Retrospective.

The high rate of follow-up, more than 125,000 visits during the voting phase, has highlighted other major international animation creations;

Such are the cases of:

- The Chilean creation "NO DA" by the director PABLO ALIBAUD.

- The acclaimed "DAISY CUTTER", of the spanish directors RUBÉN SALAZAR and ENRIQUE GARCÍA.

- The Israeli "EATLIZ - LOSE THIS CHILD" of YUVAL and MERAV NATHAN.

- The English "ROUND" of KIRK HENDRY.

Respect to the techniques showing in the competition this year, Animacam got together, once again, the last tendencies in animation (3D, experimental, video art, visual concerts) with the more traditional ones (Drawing, Stop Motion, 2D or Plasticine).

Participants of last editions had excused their presence this year, due to the international crisis that impeded them to ended their productions in time to submit them to the conquest. And so it did to the Festival Organization: this Edition was only possible because of the effort maded by the team of Limaia Productions.

Tomorrow we will offer you the top 5 in each category!

Thank so much to all!!

Know the best of the retrospective animation in Animacam
Publicado por Unknown en 1:02 PM No comments: 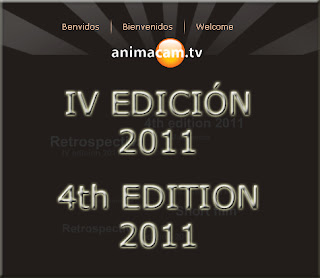 Great excitement in the final stage of voting in Animacam IV, where an initial review shows a very tight final in all categories.

With the imminent publication of the final results on Wednesday 21st, from the Animacam team we want to thank, once again, the large turnout and reception given to the festival on the five continents, getting an unique edition with the illusion of all: fans, directors, producers, distributors and the broad range of people who make of Animacam a large family.

In turn, we apologize for the problems occurred today with the Web Site of Animacam. By problems unrelated to the organization and to the festival itself, there has been a drop in the server that has inactive the web site for a short period of time.

We would like to remind you that next Wednesday you could know through this blog the different results in each category.

Receive a very affectionate greeting accompanied by our most sincere gratitude.

Know the best of the retrospective animation in Animacam

Gold brooch to the closure Animacam reception films with the release of 12 greats world premieres of animation.

To close the fourth edition of the Festival, from Animacam we offer you twelve major international animation releases and invite you to enjoy them in high quality with optional HD on the video player of the Website, it’s worthwhile.

To begin the final releases, we have the great pleasure to offer the work of the prestigious ESMA Superior School Of art. The great quality of their animation creations speaks for itself.

With "Gom" they present us the story of a particular circus in which a young boy is looking for his pro debut. This great Short film offers the best graphic quality and maximum fun, don´t miss it.

In "Little Tombstone", with a perfect 3D, ESMA young animators recreate a duel between two gunmen in a beautiful short film full of emotion.

Laughter in torrents accompanied by the best quality in "Tadufeu", where two races fighting for control of fire. If you want to have a very fun time, don´t miss it.

With "Cross Road", the ESMA members lead us to the life of a particular blues musician, who after making a pact with the devil, will soon be surprised by the demands of this. A film with a flawless script, exceptional quality and the best music that you can enjoy at Animacam 4th edition.

The Film "Reflect", takes us into the story of a restorer and a peculiar picture, which guides her through a colorful world of mistrust.

"Electroshock" puts us in the shoes of a peculiar electrician who becomes a hero into the search of the love of a beautiful young woman. Enjoy with this funny film.

If you love the comedy you cannot miss "Temps Mort", the humorous story of the Death in its fight with an endearing old lady.

The fantastic and scary side comes with "Sun Knapping" through the story of a young girl in a park. The fantasy, the psychological terror and tension shine in this film.

The ESMA Chic side is presented with the film "Au Poil", in which the utensils of a washbasin have a heated discussion in an animated film where the technical quality abounds on all parts.

The most suggestive side comes with "Eden" , where Adam will have a great internal struggle not to succumb to the charms of Eve.

If you like fairy and princesses stories we invite you to watch "Tout Conte Fait" and you have fun with this satire about the set topics of these tales.

To conclude the presentation of ESMA Superior School of Art, we offer you "Swing"; a film where you can admire a unique story with a music lover barber.

Remember that the voting time starts today. If you want to vote your favorite films in the fourth edition of Animacam, you must be registered at the Animacam Website. So, what are you waiting for?, Register yourself and be the first on voting your favorite film.

And remember ... All animators are waiting for your vote.

Know the best of the retrospective animation in Animacam