It promised surprises and this is ... a very tight final at the third edition of Animacam.
In the animation retrspective category all is the same, but the situation can change at any time since the three films are candidates for very few points between them.
In the category of best animated short, the revelation of these last days, "The carnivorous flower," is like a bullet to the throne holding Tatian. The film is second place and climbing ...
While, in multimedia category, "The days of kraulio" came back to the first place, but followed closely by "The Pavilolos" its not throw in the towel.
The classification is as follows:
Best multimedia animation 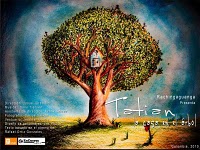